You are here: Home » Latest World News » Mali must not Be a New Site for Clashes Between Global Powers

A decade after civil conflict erupted in Mali, hopes for an early resolution to insurgency and strife have not materialized, the Special Representative of the Secretary-General for the country, El-Ghassim Wane, told the Security Council January 11 2022.

By Adam Dicko
UNITED NATIONS, Jan 21 2022 – Last week, I was delighted to speak to the United Nations Security Council. In the ten years that my country has been experiencing conflict, violence, and instability, dozens of conferences and other international summits have been held without ever really making room for those who are mobilized on a daily basis for more social justice, the defense of human rights and achieving Malian peace.

My country – and the Sahel as a whole – are rich with dynamic and innovative civil societies and youth. After 10 years of failed strategies to resolve the Sahelian crises, it is time for a change in strategy, a more humble approach, and the development of common solutions in which the local populations feel truly reflected.

I am speaking out to make that a reality, in the name of Anta, a young girl from the center of Mali who was the first victim of the security crisis, forced to flee her village to find refuge in an IDP camp, and who witnessed the killing of her parents by terrorist groups.

And in the name of Amadou, a young man from the south who is seeking economic opportunities, who is barely out of his teens, and who has to leave his homeland and venture out to sea, risking his own life to seek a better life. I speak on behalf of all those young Malians who aspire for a better tomorrow.

Two years of fighting Covid-19, there is another virus which has been spreading in Mali and the Sahel and whose many variants are dangerously feeding the crises and instability that have brought us together today: it is the virus of social, economic, political, and environmental inequality.

This virus has triggered glaring disparities, particularly in access to essential services. In Mali alone, just 2-3% of the pastoralist nomadic children attend school and healthy life expectancy is just 50 years. This virus robs millions of young Malians of happiness and forces most of them to live in poverty. 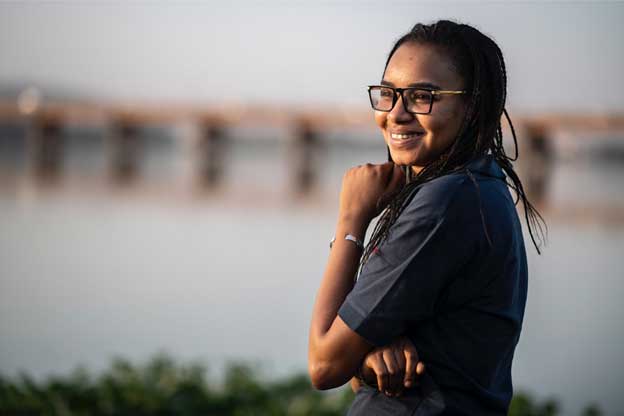 It mutates and adapts itself by profiting from a system corrupted by bad political governance, lack of transparency, and a lack of democracy, which means that many of my fellow Malians do not feel part of a society that, at best, ignores them and at worst, excludes them.

This inequality virus is insidious. When power and wealth are monopolized by a small minority, trust in the very system that allows this to happen is broken.

The deterioration of the Malian crisis has laid bare the inadequacy of the current military response, which has been unable to overcome or even contain the threat. Young people are turning against the state – the most fragile joining extremist groups for financial and security reasons.

Young Malians are watching the media in bewilderment as they see global leaders feign support for Mali, while acting in their own best interest, just like what happened in Syria, Afghanistan, Libya, to name a few.

Mali must not become a new site of clashes between global powers – and the UN Security Council can ensure this. Mali deserves better than to become a place for settling political scores.

Unfortunately, Mali is now facing the consequences of poor political and economic governance which is feeding into despair, hunger, and poverty, and young people are the main victims. This crucial governance issue has been downplayed for too long by those who claim to be trying to solve the Sahelian crises. Yet it is at the core of the challenges we face in Mali.

Currently, there has been some talk of bringing back the state to areas where it has been absent for years and which have been taken over by so-called jihadist groups. But we never question the type of state we are talking about reinstating. Is it really a solution to bring back a state which is often perceived by young people as indifferent to their fate, or even a predator? Mali is suffering from a broken social contract. Our challenge is not only to bring back the state, but to transform the state and its public actions so that they benefit all Malians.

Our problems are rooted in this pyramid of inequalities. Whilst inequality is like a virus that spreads, mutates, and kills, there are vaccines to combat this epidemic.

Fighting inequality is well within our reach. This is about massive reinvestment in high-quality social policies that benefit everyone.

MINUSMA has an important role to play in this respect, provided that it integrates local conflict management solutions and local communities. It is time to stop with “top-down” decisions; budgets voted on in New York must no longer determine the needs on the ground.

Given the prevailing political situation in my country, I repeat my call for the Security Council to lead in finding rapid solutions to the political situation between the Malian Government and ECOWAS for the benefit of citizens, especially the young people, whose future looks increasingly bleak. The Malian population is the first victim of the sanctions and yet they have already suffered enough.

Young people are already committed to renewing mindsets and behaviors that ensure true hope and renewal can be reborn in our country.