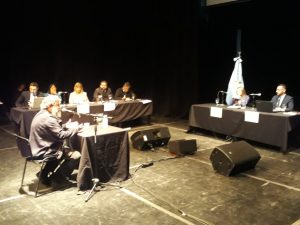 During one of the hearings in Buenos Aires, the court trying a 1924 indigenous massacre in the Chaco heard the testimony of historian Nicolás Iñigo Carrera, from the University of Buenos Aires, who has been studying indigenous history in Argentina for decades. The expert witness described in detail the conditions in the Napalpí indigenous “reducción” or camp where the massacre took place. CREDIT: Daniel Gutman/IPS

By Daniel Gutman
BUENOS AIRES, May 13 2022 – It’s a strange trial, with no defendants. The purpose is not to hand down a conviction, but to bring visibility to an atrocious event that occurred almost a hundred years ago in northern Argentina and was concealed by the State for decades with singular success: the massacre by security forces of hundreds of indigenous people who were protesting labor mistreatment and discrimination.

“We are seeking to heal the wounds and vindicate the memory of the (indigenous) peoples,” explained federal judge Zunilda Niremperger, as she opened the first hearing in Buenos Aires on May 10 in the trial for the truth of the so-called Napalpí Massacre, in which an undetermined number of indigenous people were shot to death on the morning of Jul. 19, 1924.

The trial began on Apr. 19 in the northern province of Chaco, one of the country’s poorest, near the border with Paraguay. But it was moved momentarily to the capital, home to approximately one third of the 45 million inhabitants of this South American country, to give it greater visibility.

In a highly symbolic decision, the venue chosen in Buenos Aires was the Space for Memory and Human Rights, created in the former Navy School of Mechanics (ESMA), where the most notorious clandestine torture and extermination center operated during the 1976-1983 military dictatorship, which kidnapped and murdered as many as 30,000 people for political reasons.”What we hope is that the sentence will bring out the truth about an event that needs to be understood so that racism and xenophobia do not take hold in Argentina. People need to know about all the blood that has flowed because of contempt for indigenous people.” — Duilio Ramírez

The hearings in Buenos Aires ended Thursday May 12, and the court will reconvene in Resistencia, the capital of Chaco, on May 19, when the prosecutor’s office and the plaintiffs are to present their arguments before the sentence is handed down at an unspecified date.

“This trial is aimed at bringing out the truth that we need, and that I come to support, in the place where they brought my daughter when they kidnapped her. This shows that genocides are repeated in history,” Vera Vigevani de Jarach, seated in the front row of the courtroom, her head covered by the white scarf that identifies the Mothers of Plaza de Mayo human rights group, told IPS.

Vera, 94, is Jewish and emigrated with her family to Argentina when she was 11 years old from Italy, due to the racial persecution unleashed by fascist leader Benito Mussolini in 1939. In 1976 her only daughter, Franca Jarach, then 18 years old, was forcibly disappeared.

“Truth trials” are not a novelty in Argentina. The term was used to refer to investigations of the crimes committed by the dictatorship, carried out after 1999, when amnesty laws passed after the conviction of the military regime’s top leaders blocked the prosecution of the rest of the perpetrators.

A petition filed by a member of the Mothers of Plaza de Mayo (made up of mothers of victims of forced disappearance) before the Inter-American Commission on Human Rights (IACHR) led later to an agreement with the Argentine State, which recognized the woman’s right to have the judiciary investigate the fate of her disappeared daughter, even though the amnesty laws made it impossible to punish those responsible.

Eventually, the amnesty laws were repealed, the trials resumed, and defendants were convicted and sent to prison. 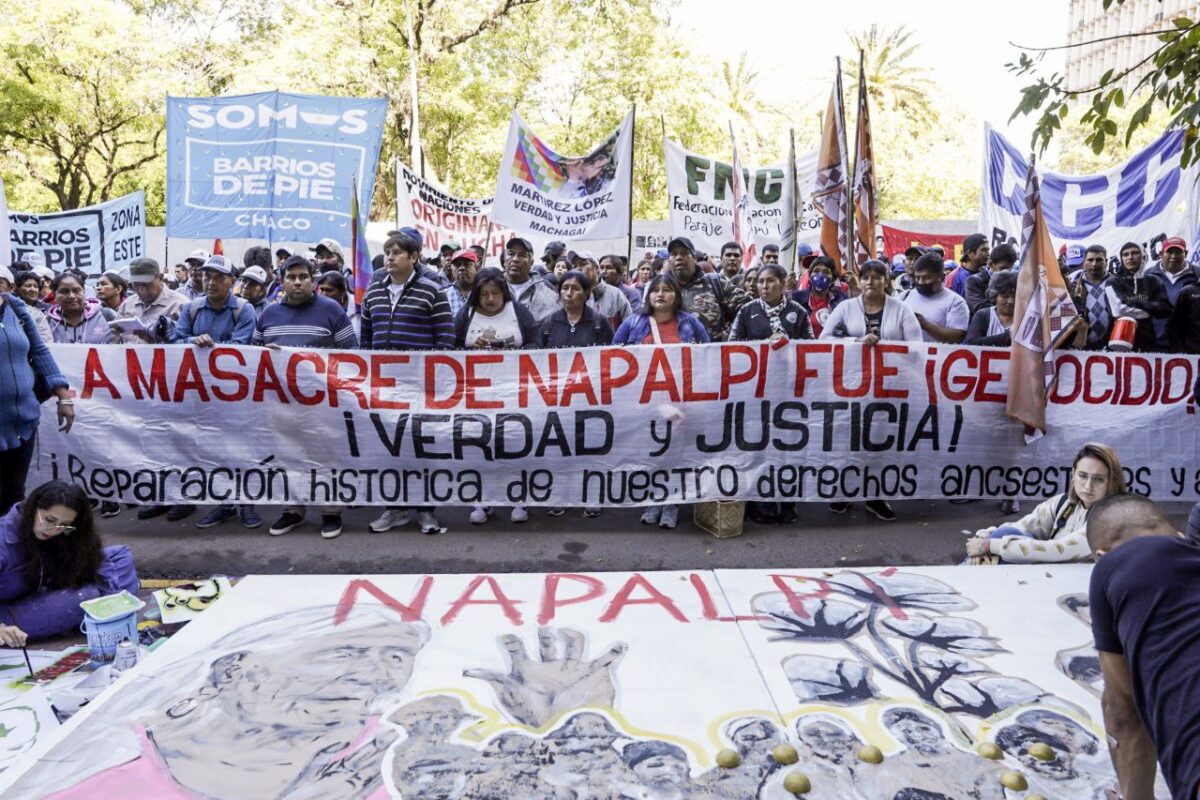 Indigenous communities and human rights organizations held an Apr. 19, 2022 demonstration in Resistencia, capital of the Argentine province of Chaco, at the beginning of the trial for the truth about the Napalpí massacre. CREDIT: Chaco Secretariat of Human Rights and Gender

“My grandmother was a survivor of the massacre and I grew up listening to the stories of labor exploitation in Napalpí and about what happened that day. For us this trial is a historic reparation,” Miguel Iya Gómez, a bilingual multicultural teacher who today presides over the Chaco Aboriginal Institute, a provincial agency whose mission is to improve the living conditions of native communities, told IPS.

The trial is built on the basis of official documents and journalistic coverage of the time and the videotaped testimonies of survivors of the massacre and their descendants, and of researchers of indigenous history in the Chaco.

The Argentine province of Chaco forms part of the ecoregion from which it takes its name: a vast, hot, dry, sparsely forested plain that was largely unsettled during the Spanish Conquest. Only at the end of the 19th century did the modern Argentine State launch military campaigns to subdue the indigenous people in the Chaco and impose its authority there.

Once the Chaco was conquered, many indigenous families were forced to settle in camps called “reducciones”, where they had to carry out agricultural work.

“The ‘reducciones’ operated in the Chaco between 1911 and 1956 and were concentration camps for indigenous people, who were disciplined through work,” said sociologist Marcelo Musante, a member of the Network of Researchers on Genocide and Indigenous Policies in Argentina, which brings together academics from different disciplines, at the hearing.

“When indigenous people entered the ‘reducción’, they were given clothes and farming tools, and this generated a debt that put them under great pressure. And they were not allowed to make purchases outside the stores of the ‘reducción’,” he explained. 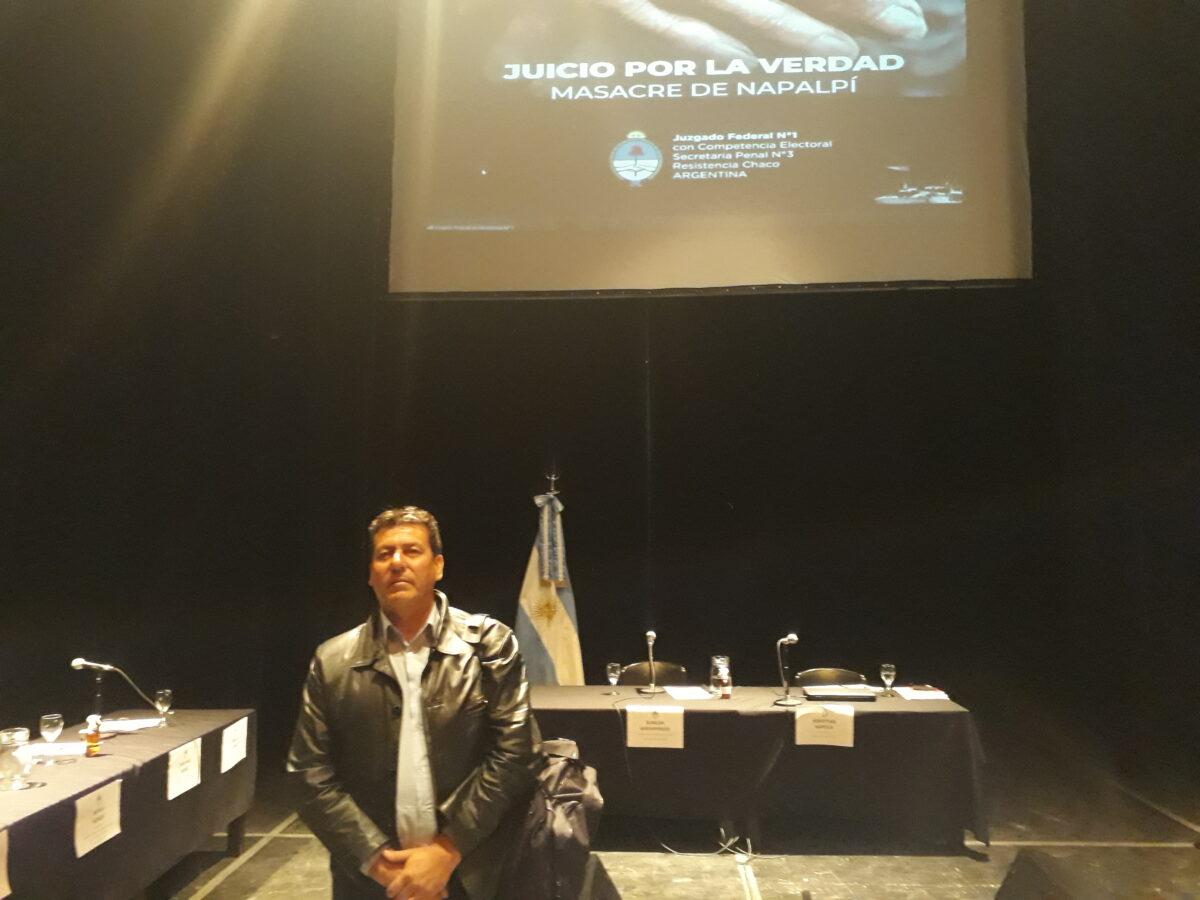 David García, a member of the Napalpí Foundation, created in 2006 to gather information about and bring visibility to the 1924 massacre, took part in the trial in Buenos Aires. His organization was one of the driving forces behind the historic trial in Argentina. CREDIT: Daniel Gutman/IPS

Historian Nicolás Iñigo Carrera said it was common for indigenous people in the Chaco to go to work temporarily in sugar mills in the neighboring provinces of Salta and Jujuy, but the scenario changed in the 1920s, when the Argentine government introduced cotton in the Chaco, to tap into the textile industry’s growing global demand.

“Then the criollo (white) settlers, who often had no laborers, demanded the guaranteed availability of indigenous labor to harvest the cotton crop, and in 1924 the government prohibited indigenous people, who refused to work on the cotton plantations, from leaving the Chaco, declaring any who left subversives,” Carrera said.

Anthropologist Lena Dávila Da Rosa said the Jul. 19, 1924 protest involved between 800 and 1000 indigenous people from Napalpí, and some 130 police officers who opened fired on them, with the support of an airplane that dropped candy so the children would go out to look for it and thus reveal the location of the protesters they were tracking down.

“It’s impossible to know exactly how many indigenous people were killed, but there were several hundred victims,” Alejandro Jasinski, a researcher with the Truth and Justice Program of the Ministry of Justice and Human Rights, told IPS.

“The official report mentioned four people killed in confrontations among themselves, and there was a judicial investigation that was quickly closed. All that was left were the buried memories of the communities,” he added.

The memories were revived and made public in recent years thanks in large part to the efforts of Juan Chico, an indigenous writer and researcher from the Chaco who died of COVID-19 in 2021.

“Juan started collecting oral accounts almost 20 years ago,” David García, a translator and interpreter of the language of the Qom, one of the main indigenous nations of the Chaco, told IPS. “I worked alongside him to bring the indigenous genocide to light, and in 2006 we founded an NGO that today is the Napalpí Foundation. It was a long struggle to reach this trial.” 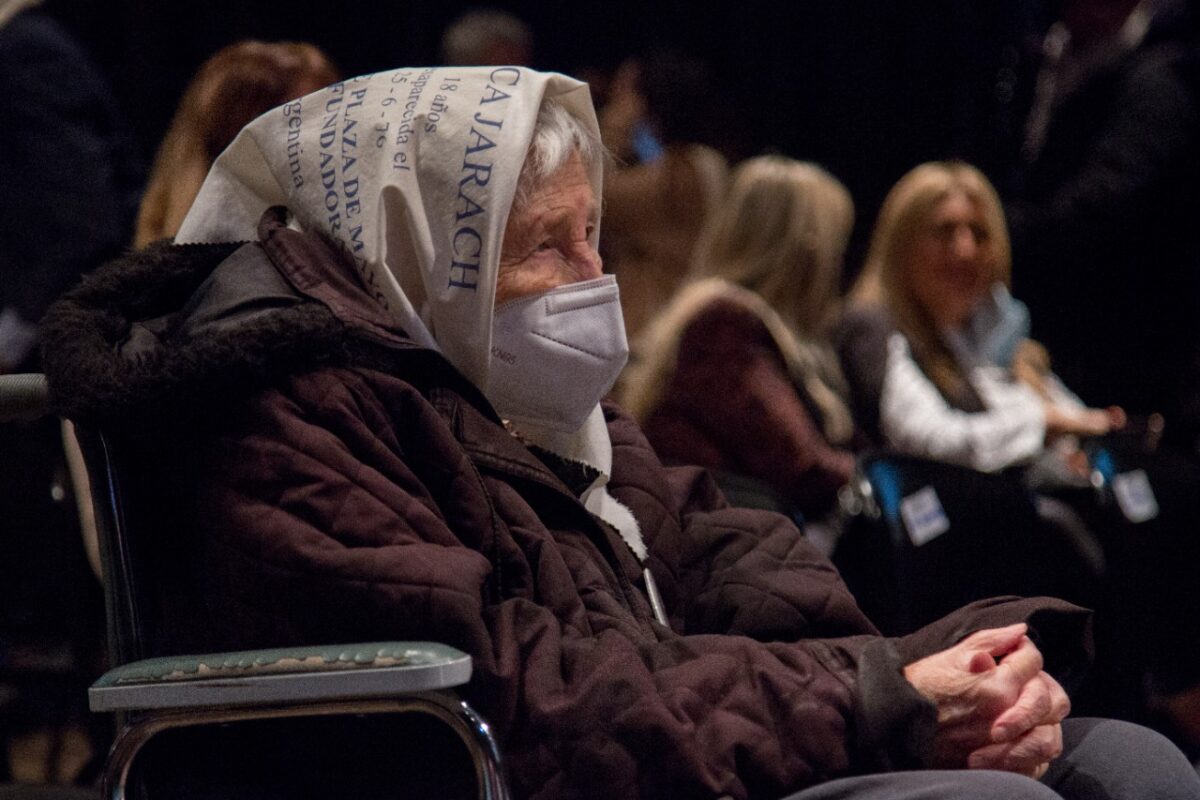 Vera Vigevani de Jarach, a member of the human rights group Mothers of Plaza de Mayo, attended the hearing in Buenos Aires for the Napalpí indigenous massacre, held in the most notorious clandestine detention and torture center used by the 1976-1983 military dictatorship in Argentina. CREDIT: National Secretariat of Human Rights

Indigenous people in the Chaco today

Of the population of Chaco province, 3.9 percent, or 41,304 people, identified as indigenous in the last national census conducted in Argentina in 2010, which is higher than the national average of 2.4 percent.

Census data reflects the harsh living conditions of indigenous people in the Chaco and the disadvantages they face in relation to the rest of the population. More than 80 percent live in deficient housing while more than 25 percent live in critically overcrowded conditions, with more than three people per room. In addition, more than half of the households cook with firewood or charcoal.

Today, the site of the Napalpí massacre is called Colonia Aborigen Chaco and is a 20,000-hectare plot of land owned by the indigenous community where, according to official data, some 1,300 indigenous people live, from the Qom and Moqoit communities, the most numerous native groups in the Chaco along with the Wichi.

In 2019, mass graves were found there by the Argentine Forensic Anthropology Team, a prestigious organization that emerged in 1984 to identify remains of victims of the military dictatorship and that has worked all over the world.

“What we hope is that the sentence will bring out the truth about an event that needs to be understood so that racism and xenophobia do not take hold in Argentina,” Duilio Ramírez, a lawyer with the Chaco government’s Human Rights Secretariat, which is acting as plaintiff, told IPS. “People need to know about all the blood that has flowed because of contempt for indigenous people.”

“We hope that with the ruling, the Argentine State will take responsibility for what happened and that this will translate into public policies of reparations for the indigenous communities,” he said.